If The Onion – a satirical news publication – ran the opening story, it would expose only the negative side of the slow-moving train wreck of the modern anti-money laundering movement. A future article will outline what FATF has done well. It might surprise you.

After The Economist, Forbes and others based articles on my research about anti-money laundering’s effectiveness deficit, it is worth reflecting on what The Economist missed. (Clue: Even great journalists fall into huge orthodoxy traps. Like hiking through Yellowstone Park without a geologist it is virtually impossible to see that you are inside the caldera of a super volcano).

Why does outcomes science matter in AML? A common refrain is that it works because we rescue trafficked people, and catch drug traffickers. We just need to double our efforts. The problem with that thinking is that if there's 1,000 victims and 1,000 criminals, rescuing one and locking up one, and  doubling our efforts for two, ignores a rethink and reset to rescue 400 and lock up 400, the real impact on crime intended by G7 leaders before anti-money laundering became an ideology, blind to police science and outcomes science.

This site will feature obstacles to better outcomes and curious forks in the road of history. (For example, a fundamental design flaw – triggered by three ambiguous words – may have been influenced by a curious turn of events on a warm Sunday, in Paris, with officials and world leaders distracted by dancing bears).

If there is enough interest in AML effectiveness, future stories may address:

If I am wrong and there remains scant interest in what AML effectiveness really means (a distinct possibility, based on the past 32 years), the third (current) round of “effectiveness angst” in three decades appears set to follow its predecessors. Just like in 1989-1990 and (especially) 2010-2012, there is again lots of talk loosely using the language of “effectiveness” and “outcomes” without much discernible connection with established, proven, practical methods for enabling intended outcomes.

But I am optimistic.

Anti-money laundering may be the only major policy endeavor with few connections with effectiveness and outcomes science but, for the first time in over 30 years, there seems a scintilla of interest, and growing recognition that using the words “effectiveness” and “outcomes” does not make it so, and that “hype and hope” is not a strategy.

To reorient for effectiveness, we must first face reality, frankly.

This site seeks to move some blackened stumps of calcified thinking and clear a few embers of unproven assumptions and belief – while hopefully avoiding some of the fires of raging dogma – to help clear a landing strip for new ideas.

[And a few mangled metaphors].

More importantly, perhaps, the latest research suggests that pathways to effectiveness no longer need to be top-down.

For the first time, it may be possible for leaders in individual banks, law enforcement agencies, and countries to start turning the tide, without first having to change the system. To tick the boxes while also moving the dial. With success, measured objectively and robustly – with metrics that matter – others may follow, not because they are forced to, but because it works. “The system” can catch-up, and might once again lead for outcomes, as G7 leaders’ intended over 30 years ago.

If you want compliance tips, this site is not for you.

It is for those interested in transformational impact, and leadership for outcomes, from coalface to boardroom.

That is no boast. Frankly, it is tragic. Joining anti-money laundering practice with proven and practical ways to achieve intended outcomes remains vanishingly rare.

But outcomes science is not rocket science.

Some people collect university qualifications like a sport, but other great thinkers have no degrees – nor even (tellingly, perhaps) the omnipresent online short-course anti-money laundering certificate.

The key skill is critical thinking.

The only prerequisite is an aptitude to question assumptions and beliefs, sometimes even our own.

The only goal is enabling substantially better outcomes – beyond hype, rhetoric, and bullshit.

If that sounds like you, this site is for you.

Sign up, buckle up, and help kickstart a real conversation about effectiveness. 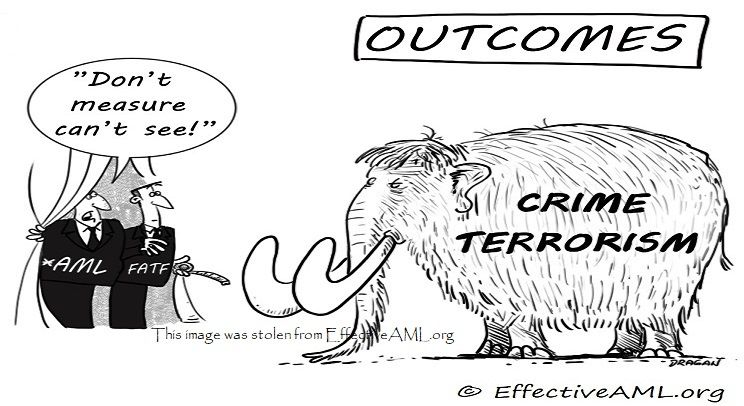 New website: Is it time to talk about Effective AML?